A Voice Cries Out In The Wilderness

Most Muslims in the world are peace loving, and gentle humans, like most Christians, most Jews, and most others on this earth. This delightful young woman has more faith than most of us on this planet. God/Allah, bless her abundantly. She is a voice in the wilderness.

Catholic News Agency has an article about Randa Ghazy, who at 22 years of age, has more wisdom than anyone in any HRC/HRT in the world. Here is the article that appeared:

A young Muslim writer named Randa Ghazy has written an article entitled, “I, a Muslim, Defend the Crucifix,” in which she expresses her opposition to a ruling by the EU Human Rights Court that ordered all crucifixes be taken down in classrooms across Italy. The article will appear in the December edition of the magazine Mondo e Missione, a publication of the Pontifical Institute Missioni Estere. 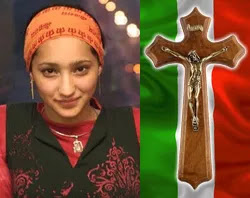 “One of the most beautiful memories of my childhood and adolescence was of Father Bruno,” she writes. “I would often go to the oratory with my little brother and the sisters would treat us with great kindness and care.”

Ghazy recalls as well that “Father Bruno made us truly laugh. When it was time for Mass, my brother and I would run off to play ping pong and eat candy. Every day Father Bruno would ask us to stay with the other kids who were there in the church, which we embarrassingly declined to do.”

“One day, Father said to us, ‘Why don’t you come and say your prayers?’ And so we did. During Mass my brother and I slowly recited prayers from the Koran. So the crucifix, all the different kinds that I remember (from grade school to college) was always a symbol of security for me, a projection of the greatness of the heart of Christ, and in some way, of Father Bruno.”

For this reason, Ghazy says, “I support and encourage every possible debate between Muslim and Christian citizens, all discussion about the secularity of the State, but with respect for the great models of humility that each one can find in his past and his experiences.”

“I turn off the television so I don’t see the continuous verbal assaults, I remember Father Bruno and I smile, thinking about those two little Muslims who looked at each other in that beautiful church. I almost feel nostalgia for the 90s,” she writes.

The young Muslim writer was born in 1987 in the Italian region of Lombardy to Egyptian parents. She has written three books, the first when she was only 15, entitled, “Dreaming of Palestine.” The book is about the friendship shared by a group of young people in the occupied territories.

Her second book, “Bloody Trial,” was published in 2005. In 2007 she wrote, “Today I'm Not Going to Kill Anyone: Short Stories of a Young Muslim Who is Not a Terrorist.”

I would really like to read what she has written.
Posted by Michael Brandon at 12:48 AM