Of Elephants and Christmas

In a section of Steynian 399, the Reverend Binks writes of his faith in Jesus Christ, a faith that I share, and as he has done it so well, I have reproduced it for you, and thank him for saying it so well:

~ ITEM: APOLOGETICS 101: How to defend Christian exclusivism from the challenge of religious pluralism

There are hundreds of paths up the mountain,
all leading in the same direction,
so it doesn’t matter which path you take.
The only one wasting time is the one
who runs around and around the mountain,
telling everyone that his or her path is wrong.

~ ITEM: God is an Elephant? Examining the Blind Men and the Elephant philosophic argument in philosophy of religion

~ ITEM: Elephant in the room – Wikipedia, the free encyclopedia

~ A VERY OLD STRAND of anti-Christian apologetic goes thus: there are many paths up the mountain to god, the gods, or the divine– how can you say yours is the best, or the only way? Surely that is very arrogant. Another version of this is the old elephant in the living-room analogy, where each blind man feels something different, and assumes it’s a snake, a wall, a tree-trunk, whatever. Gotcha.

Since it’s coming onto Advent and the Christmas, it’s worth revisiting these objections to Christian claims.

First, the pagan mistakes the order of revelation, and the nature of religion, in assuming the assertion of Jesus Christ that he was God’s only begotten Son, Indeed, the human soul aspires for the divine (or substitutes thereof), and many world religions can be seen as fulfilment of human aspiration. The Christian says, rather, that God has let down a ladder to the mountain-top, by revealing himself to humanity in his Son, that all who believe in him might be saved. It’s a earth-ward motion from God, not another human motion towards heaven (the many paths). For the problem is not mountain-tops, but getting up to heaven: and for that you need love, and a living wind from heaven.

God has revealed himself: so the Christian cannot be arrogant in refusing to pass on the word about the Word made flesh, who dwelt amongst us. It’s not arrogance, but humility to share what God has done, however frail or proud some Christians are or have been in doing so. Indeed, Christianity understands itself as the proper and true fulfilment of every religion, and all human hope, fear, need, and aspiration– and philosophy.

“…according to Plato the truly just man must be misunderstood and persecuted in this world; indeed, Plato goes so far as to write: ‘They will say that our just man will be scourged, racked, fettered, will have his eyes burned out, and at last, after all manner of suffering will be crucified.’ This passage, written four hundred years before Christ, is always bound to move a Christian deeply.”

As for the elephant, well– it’s an elephant. Even if the describe it wrongly, it’s still an elephant and not some other object or animal. Indeed, unless the blind men were raised in some far country where they’d never met or learnt of such, they’d figure it out.. or ask a local, preferable one with eyesight. Or notice it breathing and farting and getting impatient with being prodded. Never met a blind [person that clueless before, and no-- some of my best friends aren't blind people, sorry.

Whoa there, Nelly-- again, the untested assertion behind the blind men and elephant analogy is that we are all spiritually blind, and can only go by our best guesses, because-- you guessed it-- all religions ar fundamentally equal and all say the same thing and we should be nice and recycle and all that.. except, they don't. Just ask Major Hasan, or the Chief Rabbi of Great Britain, or the Dalai Lama, or Pope Benedict XVI, or even sub-sects within each religion.

To claim we are all blind is in fact to beg the question, and arrogantly presume to have answered the question beforehand... it's a fancy version of "So, are you still beating your wife?" It's a sly cheat, however 'holy' the source. It's to say "The only true religion is that which says there's no true religion." Thus, it's also a contradiction, as in: It's absolutely true that there are no absolute truths. Busted! 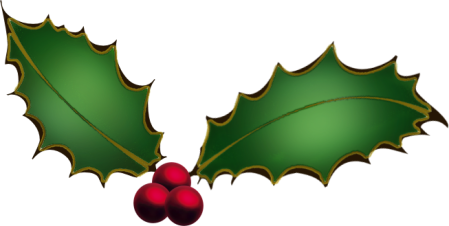 The question of Christianity is a who, not a what, nor a philosophical puzzle: love him or hate him or in between him, Jesus of Nazareth is the central personage of the last 2000 years of human history, and still confronts those who encounter him with the same question he asked St. Peter: "Who do you say that I am?" And if-- as Christians claim-- that unlike any other religious leader ever, he is eternally and divinely alive despite death and the grave, he actually asks each soul sooner or later, and will not let us go unless we finally and ultimately insist.

That's the big deal behind the wrappings, the converted paganism, the holly jolly music and feasting and all that-- God born as a baby, that we might become gods through him, and partake of his divine nature.

So ring the bells of Christmas, bring the figgy pudding, and joyfully sound the carols, for joy to the world, the Lord has come. Ask any convert, any suffering Christian in Hindu or Moslem or Communist lands, anyone who is spiritually alive and more than a sleepy cultural Christian, and they will tell you... as I just tried to do, in my own poor and inadequate way. Because he lives, I live also-- and that has made all the difference. ~ 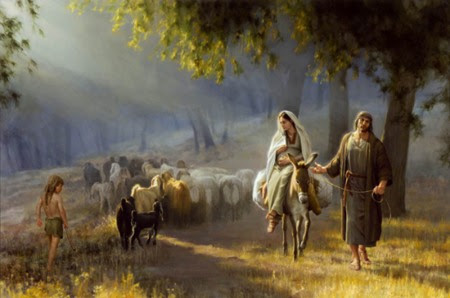 Posted by Michael Brandon at 2:48 PM