Catholics Not The Red Headed Step Children of Christianity

Nor The Church of the Anti-Christ
Dear friend, Catholic writer Jennifer Hartline has written the article below and posted it on her blog site at My Chocolate Heart.
We are in the midst of talk of scandal over sexual abuse, and attacks in the media that have jumped off from that bandwagon to pursue Christianity and in particular Catholic Christianity doggedly for all kinds of failures.  These failures include the failure to see the need the world sees for abortion as a method of birth control, and other equally heinous things, upon which Catholic Christians will never be able to bend.  To this mix is added that we are being bent, though not broken by well meaning Protestant Christian brothers and sisters, who see us as not saved, hell bound and even unchristian.
It is painful to have fellow Christians telling us, in their own ignorance, that the Catholic Church believes this or that, and not this or that, and that it is not biblically based.  There is no teaching of the Catholic Church, as presented to Catholics by the Magisterium of the Church that is not founded on the bible.  It is regrettable though that most Catholics are not even able to find their bibles, and are not familiar with either what the Church teaches on a particular topic, or where to look for the teaching, and how to discern from it the basis in the bible.
We Catholics have brought much of this false teaching about out faith upon ourselves by our failure to be knowledgeable about our faith, and its foundations.  It is time for us to care enough about our beliefs in Jesus and His death and resurrection, and what it means for us, to stretch our faith muscles, and to share the gift of faith we have with our brothers and sisters in Christ, not to convert them to our way of thinking, but so that we all may be one in Christ.
But, here is what my friend was feeling and thinking yesterday:


It's possible my skin is a bit thinner than usual these days, due to home life busyness and chaos that's more ramped-up than normal,  but I am so sick to death of hearing from Protestants that I'm not a Christian, or I'm not saved, or I'm lost and confused,  or blah, blah, blah.
Sheesh.  Give me a break already.  You'd think the Bible fell out of the sky one day, leather-bound with a concordance, and landed in Luther's or Calvin's hands and prior to that, nobody had heard the word of God before.  You'd think that Christian churches simply sprang up out of thin air in the year 1500 or so, and prior to that Christianity was waiting in limbo to be shared with the world.
Catholics are not the red-headed stepchild of Christianity.  We are not pagans, heathens, or idolaters.
This kind of petty, ignorant, and pig-headed crap has to stop.  I have never in my life presumed to tell a Protestant that they're not going to Heaven, or they don't know Jesus, or they're not saved, or blah, blah, blah.  How could I possibly make such a pronouncement?  What grief we must inflict on Jesus' heart with our stupid nonsense.
I could never not be Catholic.  I have found it to be the fullness of the Christian faith and I will never settle for anything less.  I could not live without His body and blood.  I believe Jesus built His Church on the Rock of St. Peter and since then, it has continued and the gates of hell shall not prevail against it.
I'm sad and sorry for the splintered Christianity that exists today, and I pray that we will all be one again soon.  In the meantime, I love my brothers and sisters in Christ; I learn from them and take inspiration from them; I am often so amazed and blessed by them.  I just wish some of them could stop nailing their personal manifestos to the door already. 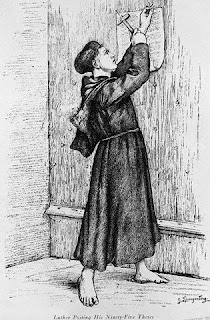 Posted by Michael Brandon at 8:04 AM