I am fatigued by the abundance of drivel being written about the sex abuse of young by Catholic Clergy, because the bias makes it seem like this scandal is about the Church.  It is not about the Catholic Church.  Sexual abuse of minors was rampant in our society, and there are even organisations about today who want to make it legal for men to have sexual relations with young boys, because it is "healthy".

From personal knowledge of some women that I know and have the greatest respect for, who were victims of heinous sexual abuse by their own father, I have known for many years that the sick abuse that was committed by Catholic clergy is a small portion of the whole.

To make this a Church bashing issue is to minimize the pain and suffering of these women and many other men and women like them, because in general they have not place to turn.  Many have carried the burden of shame and loss with them for their adult lives, because who will believe them, and can they even believe themselves.  Can they believe that they did not bring this on themselves in some twisted logic?  The women I know best who were abused, were told by their own mother at the time that it never happened, or that if anything happened, it was really nothing.  She was more concerned about how the family would look to the outside world, than about their pain and suffering, and the loss of their innocence and childhood.

But, in the midst of a lot of yellow journalism, and invention of links that do not exist, and finger pointing from major main stream media outlets, comes a writer for the Oregonian, who actually did some research before putting fingers to keyboard, and produced a real balanced article.  Figure it to come from Oregon, not Washington or New York.

Here is what was published in The Oregonian:


By Susan Nielsen, The Oregonian 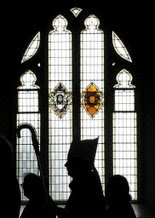 Is the pope Catholic?

Victims worldwide continue to pour forward with stories of abuse as children at the hands of clergy. Many of the allegations have been substantiated by priests who've confessed. Even the pope himself was drawn into the scandal last week with questions about his past role in protecting an abusive priest from earthly consequences.

The surprising part here isn't the sheer number of victims, from the deaf children in Wisconsin to the altar boys in Ireland. The real shocker is remembering that most child sex abuse victims aren't connected to churches, don't file lawsuits and never speak publicly at all.

At least one in five girls and one in 10 boys experiences unwanted sexual touching or other sex abuse, based on federal data and research cited by the National Center for Post Traumatic Stress Disorder. Most of the bad actors in these cases are not priests or pastors. They are stepfathers, family friends, fathers and neighbors.

The majority are never held accountable.

"I think of that as the hidden iceberg," says legal scholar Marci Hamilton, a national authority on child abuse at the Benjamin N. Cardozo School of Law and the author of "Justice Denied: What America Must Do to Protect Its Children."

She added, "There is a tremendous amount of suffering."

Traditionally, about 90 percent of victims don't speak out, and the reasons are as messy and common as the crimes themselves. It can take decades for victims to shake off enough of the shame to stop feeling responsible.

"Denial and survival play a huge part in the reason why victims of abuse 'wait' to come forward," or never say a word, says Kristi Kernal of Beaverton, a co-founder and board member of OAASIS, Oregon Abuse Advocates and Survivors in Service.

Also, until recently, most state laws enforced a tight window of time during which victims could successfully seek justice. The statute of limitations would close while victims were still in their teens or early 20s, typically unprepared and ill-equipped to take on the authority figure who abused them.

Staying quiet is a rational decision. So is eventually speaking up years later, whether in a counselor's office or a lawyer's conference room.

The alternative is to keep paying the price with compromised health and troubled relationships.

The Catholic Church eventually will work through its backlog of sex abuse cases. Some evidence suggests that American churches are inching toward resolution, even while Europe confronts its own crisis: In 2009, the number of new allegations, victims and known offenders in the United States dropped to the lowest point since 2004, according to the U.S. Conference of Catholic Bishops.

The process of legal and spiritual atonement is terribly wrenching, both for the Catholic Church and the people within it. But a clear upside exists.

The scandal is transforming American culture, forcing people to adopt prevention strategies and talk to children about warning signs. The fog of shame around sex abuse is beginning to lift.

This change may help the church recover and renew itself.

More important, it will help victims -- including the silent ones everywhere -- slowly heal.

The truth will set us all free.
Posted by Michael Brandon at 8:14 PM