Canadian and US Military

H/t Libby and Bob for the US military.

As a Canadian, I acknowledge that we are shy, quiet and reserved.  As such, there is not a lot of noise about our fighting men and women over in Afghanistan.

But, I received a picture of the daughter of an old friend, who used to wear pony tails at our company picnics many years ago.  She seems to be missing the pony tails now, but the automatic weapon and even the dog in her arms is a statement.  She is with the Canadian military in Afghanistan, and has also served in Kosovo.  Our Canadian military personnel are serving with valour and distinction in Afghanistan, and we pray for their safe return upon successful completion of their mission. (picture removed)

My friends noted above sent this collection below of a picture of deploying troops, and possible bumper stickers seen with comments about US military might.

It takes guts to do what our young friend above and our brothers and sisters pictured below do to protect us and others.  So, a little bragging about their might and power does not bother me, though I am sure the politically sensitive (correct) might disagree.

So to the politically correct who are offended, I say, when you are ready to put your own money where your mouth is, sign up and go fight for something.  Until then, sit back and shut up.

All these brave men and women need our prayers and support, not our criticism. 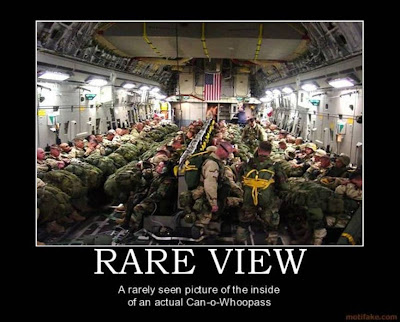 "Except For Ending Slavery, Fascism, Nazism and Communism, WAR has Never Solved Anything."

"When In Doubt, Empty The Magazine"

"The Marine Corps - When It Absolutely, Positively Has To Be Destroyed Overnight"

"Death Smiles At Everyone - Marines Smile Back"

"Marine Sniper - You can run, but you'll just die tired!"

"What Do I Feel When I Kill A Terrorist? A Little Recoil"

"Life, Liberty and the Pursuit of Anyone Who Threatens It"

"Happiness Is A Belt-Fed Weapon"

"A Dead Enemy Is A Peaceful Enemy - Blessed Be The Peacemakers"

"Some people spend an entire lifetime wondering if they made a difference in the world. But the U.S. ARMED FORCES don't have that problem." ...Ronald Reagan
Posted by Michael Brandon at 9:01 AM

Hi Michael,
The Julia's photo must be removed from your site. Why was it put there without asking Julia and why the photo has her full name?

I did not realize that the name was in the link to the picture. I had intentionally kept her name out of the article.

As Canadians we are proud of her service to her adopted country.

Michael,
We appreciate your prompt reply.
The photo is still online. I guess it will take a few weeks to disappear unless Google can do something about it.