When Father Gordon writes, he always leaves me wanting more, and so I have to research sources for many of the things he writes and always discover there that the vein of gold he has opened up for us runs deeper and shines more brightly than at first glance.

Today's story of Anthony Begin, a fellow inmate at the New Hampshire State Prison for Men is in itself uplifting and inspiring, but is only the tip of the iceberg.

Father Gordon first gives us a little glimpse of Christmas on the Bipolar Express, a tiny peek at what life behind bars is about this time of the year.

But, he does not tarry there, as he reminds us of the miraculous work of Divine Mercy in the story he previously told of his compatriot and mentee Maximilian Pornchai Moontri, in A Stitch in Time, Threads of the Tapestry of God.

Then he weaves for us a glimpse at one of the Last 4 Things, which the Church has always held as Death, Judgement, Heaven and Hell, and writes of Anthony Begin, and how he has had a miracle in his life that has deferred his own death from imminence to an indeterminate time in the future.  It seems that God is not done with Anthony (who by the way shares a common Saint with me, as my middle name, and the first name of my long dearly departed grandfather is Anthony).

But, what Father Gordon does with Anthony's reprieve is remind us of the fragility of life, and the eventuality that we will encounter the first of the Last 4 Things, Death.  God has spared Anthony for now because he has plans for Anthony, not the least of which is allowing him to grow in his faith. One of the things to come from Anthony and his story of healing and faith is that it has fallen into the hands of a teller of stories Father Gordon, and has opened him up to telling us of the Last 4 Things, which in turns opens his readers to them as well.


Anthony found this to be profoundly hopeful. So do I. It’s also sobering, calling to mind that our “momentum mortis” is something far deeper than a reflection on death. It’s a reflection also on the art of living, and it’s the greatest of Advent hopes. Opening ourselves to the Birth of Christ lets fall away all the hubris of being human. We belong to Christ, and we have but a little Advent left to come to terms with that.

Anthony, too, has seen the Fall of Man. He has seen it in himself and all around him. The great thing he is now to achieve, the thing he will take into life in eternity, is the sure knowledge that no one can witness the Birth of Christ, and remain a prisoner.

There is profound hope in Father Gordon's conclusion.

But, as always, his post is pregnant with meaning.

Perhaps you noticed the picture in the middle of the posting.  It is a picture of a painting by Hieronymus Bosch, painted about 1500 and entitled The Seven Deadly Things and the Four Last Things. 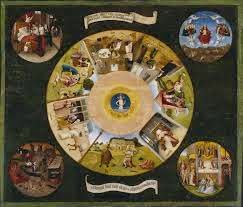 I first came across the name Hieronymus Bosch in the novels of Michael Connelly, where his hero Detective Harry Bosch was actually named after the painter.  So, with the help of Google, I was able to learn a little bit about the artist, about whom only a very little bit is known at all.

Of interest to readers of Father Gordon MacRae, the real Hieronymus Bosch, a Catholic, joined the Brotherhood of Our Lady, a religious organization devoted to the Blessed Virgin in about 1486, and died about 1516.  So, it seems fitting that an image of a painting by Bosch should grace the blog site of a man committed to his Consecration to the Blessed Virgin.

Father touched on the 4 Last Things, which made me delve into them a little deeper, and it is not only appropriate for us to so do, but is essential for us as we look forward to our own passing away from this mortal coil.

The 4 Last Things are worthy of contemplation, and there is an excellent series written by Deacon Michael Bickerstaff co-founder of The Integrated Catholic Life available at this link.

Bosch graphically depicted in this painting how the 7 Deadly Sins impact on the 4 Last Things.

But, as long as we are so busy about today so as to not look towards the future of our immortal souls, we are in for a surprise, quite possibly not a pleasant one.


Posted by Michael Brandon at 1:03 PM

Once again, Michael Brandon's commentary about my post is better than my post! Bah, Humbug! I wish a Blessed and Grace-filled Christmas to Michael and his family and all readers. Father Gordon MacRae

Keep Up With Catholic News