God Is So Good

Sometimes I have Missed God's Beauty

OK, OFTEN I have missed God's beauty.  Mea culpa.
5 years ago next month, My Dear Wife and I moved into the house we currently occupy. We found a bucolic setting about 5 minutes from downtown London, Ontario in a suburb called Oakridge Acres.  It is the first "subdivision" that was built in the London area and our home is about 55 years old.
Although we have really enjoyed it, and it provided a great location for my 2 youngest daughters who were still in high school at the time, I had missed something of its pastoral charm until last evening.
Behind our house is a 5 acre park called Kelly Park, and we have the benefit of enjoying the woods there, from our back yard gazebo or tent on our deck, or from the view out our picture windows in the family room.  It is a thing of beauty for each of the four seasons. 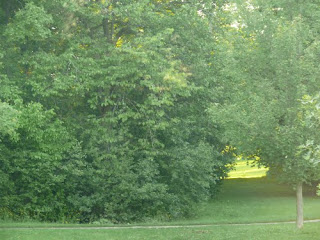 Although we are well inside the city boundaries, we have been graced with considerable interesting wildlife.  We attract many birds to our feeders, including an Eastern Towhee this year for the first time.  For 4 of the 5 years that we have been here, we (I, really) battled with some very acrobatic squirrels who found new ways to get to the bird feeders.  Every time, I would figure out how to prevent the squirrels, particularly Super Squirrel, a talented grey squirrel, from getting to the feeders, they would come up with a new angle.  But, last year we went to a figurative shootout, and I was able to prevail with my superior brain power, and a stroke of luck, which has held through this Spring.  If they beat me again this year, I am contemplating a literal shootout - just kidding.  I like the battle of wits, nit wits versus half wits.
Last year, we were the landlords for a mother duck, a regular fixture in the neighbourhood, along with her mate, who decided to build her nest behind our air conditioner at the front of our house.  She sat on her eggs until they hatched, and we marvelled at her and her new young chicks.  The next morning it dawned on me that she would be heading for water first chance she got.  I checked and she was still there, so I had my breakfast.  When I went to check on her again, she had flown the coop literally, though it was probably a waddle, as her charges were not yet airborn.  I hopped on my bike and headed for the river, about 1/4 mile away, figuring that I might get the opportunity to direct traffic for her to guide her across Riverside Drive.  Big brave hero saves duck and young family.  But, it was not to be, as I could not find her, having looked high and low.
What I had failed to do, was check out my next door neighbour's pool.  A day or two later, my neighbour, Andy told me a tale of coming to the rescue of a mother duck and her brood who had hopped into his pool, but had no way out on their own.  His skimmer had come in handy as a rescue aid, and so mother and children were set free to find a more suitable swimming area.
Last year also, a family of skunks made our yard into their playground and nap spot.  Our motion triggered lights came on at all hours of the night as they and the raccoons, did their thing, and some of our favourite flowering plants were bent down to the ground, having provided comfortable rest spots for them.  The little stinkers do not seem to be here this year, having moved on to other locales, I guess.
The raccoon was an inquisitive fellow, and set off the motion lights time and again, as he found a snack in the sugar water that we had out for the hummingbirds.  Any night that I forgot to bring the humminbird feeder in, our buddy was quick to empty it.  One particular evening, I came out to the deck to get the feeder a moment too late, and we had a stare down.  Raccoon 1, me 0.
We also have had a cute little chipmunk for the last couple of years, who likes to get the seeds below the bird feeders, and scampers around on the rocks and gardens looking for food.  It is cute to watch him watch us, as we sit in our gazebo over a beverage, while he does his thing.  He pops up onto his hind legs to get a good view of the action.
This year, we have had a few other visitors.  A mother robin decided to build a nest over our front porch light.  After she produced three youngsters, they left, so I removed the nest.  Recently, she returned and rebuilt the nest, and seems to be sitting on another set of eggs.

But, last night was the coup de grace, as opposed to the cut the grass, and it is this that made me look back and see how blessed we have been.


I was sitting in the family room, and something in the yard caught my eye.  What was unusual was that what caught my eye was actually at eye level with where I was sitting.  Being the bright old fellow that I am, in non time flat, I realised that it was a deer - in our back yard.  We had seen a mother and a fawn in the woods behind the house last year, so it was not a complete surprise, but it sure was surprising none the less.
As My Dear Wife was out for the evening, I wanted to memorialise this siting, and went looking for the camera.  Cameras are never where you expect them to be, if you are in a hurry to find them.  They have mysteriously moved to a secret spot, known only to the camera.  But, I found it after a little mystery, and snuck out onto the back deck to take a few pics.
Here are a couple of samples of the young lady in the yard, and by the shed, as she was about to hop the fence back into our neighbours yard, from whence she had come.
All in all, these opportunites to enjoy nature are wonderful gifts of God's grace to us. 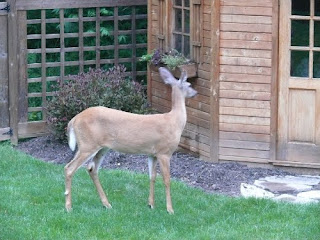 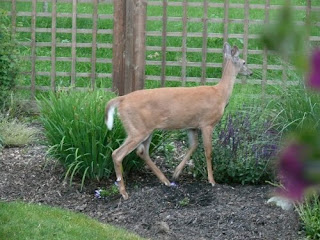 Posted by Michael Brandon at 10:04 AM