Here is what Easter is all about. 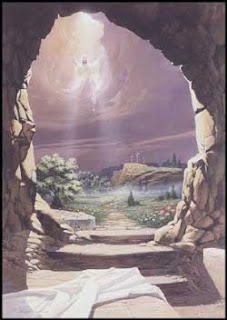 Let this mystery teach us faith.
~~~
For days they’d been wildly celebrating. They circled round the table where the dead lamb lay as testament to their master’s stunning achievement. With their glasses raised, they shout, “Victory to our prince! God is dead! Look at him now! God is dead!” With their forks they stab at the lamb, and spill their bitter gall on the mangled, bloodied flesh.

With a smug, satisfied snarl, Lucifer turns to his minions and bellows, “Who can stop me now? Surely I am ruler over all the earth and all its people will be subject to me, for I have slaughtered their pathetic, meek little God.” Hoisting him up on their shoulders, they dance around the room in hysterical carousal. “God is dead!” they shout. “Victory to our prince!”

Suddenly, even over the din of their drunken cackling, he begins to hear a sound in the distance that sends shivers up his crooked spine. “Silence!” he hollers. “Listen,” he says, “what is that sound?”

Their eyes grow wider as the sound grows louder and stronger, and now his pathetic lackeys are cowering and whimpering in fear. Even he can’t stop the terror rising in his throat. It is the sound... of joy.

“Alleluia! He is risen from the dead and He lives forevermore! Worthy is the Lamb that was slain! To Him who sits on the throne, and to the Lamb, be praise and honor and glory and power for ever and ever!”

In a flash he whips his head around toward the table, his trophy now gone. “NO!” he roars. There in the center of the table is a note, secured by a bloody nail. Slowly he slinks over to it, frothing at the mouth, trembling in anger and fear, and reads his doom:
~~~
You lose. Love wins.
~~~
“Death has been swallowed up in victory. Where, O death, is your victory? Where, O death, is your sting?” 1Corinthians 15:54-55

Jesus didn’t merely endure the worst the world had to offer. So great is His love for us that He plunged Himself into the deepest, darkest pit of hell itself, consuming its fire and conquering its power forever. We need no longer fear the agony of hell, for He has suffered it for us, and now He lives!

If not for the Resurrection, there could be no faith. It would be pointless to believe in a Lord still buried in a tomb. “And if Christ has not been raised, our preaching is useless and so is your faith.” 1Cor 15:14

He is alive! The victory is won, and though Satan rages in bitter anger over his defeat, even he knows that all who believe in Christ will not perish but have everlasting life.

Jennifer Hartline is a grateful Catholic, an Army wife and mother of four precious children (one in Heaven).  She is a contributing write for Catholic Online on topics of Catholic faith, family, Life and politics.  She is also a serious chocoholic.  Visit her at My Chocolate Heart.
- - -
Deacon Keith Fournier asks that you join with us and help in this vital mission by sending this article to your family, friends, and neighbors and adding our link (www.catholic.org) to your own website, blog or social network. Let us broadcast, we are PROUD TO BE CATHOLIC!

Posted by Michael Brandon at 7:43 AM